RAY SMITH: HYBRIDITY AS A STATE OF BEING by Chen Yerushalmi

A look into Ray Smith at Mana Contemporary. 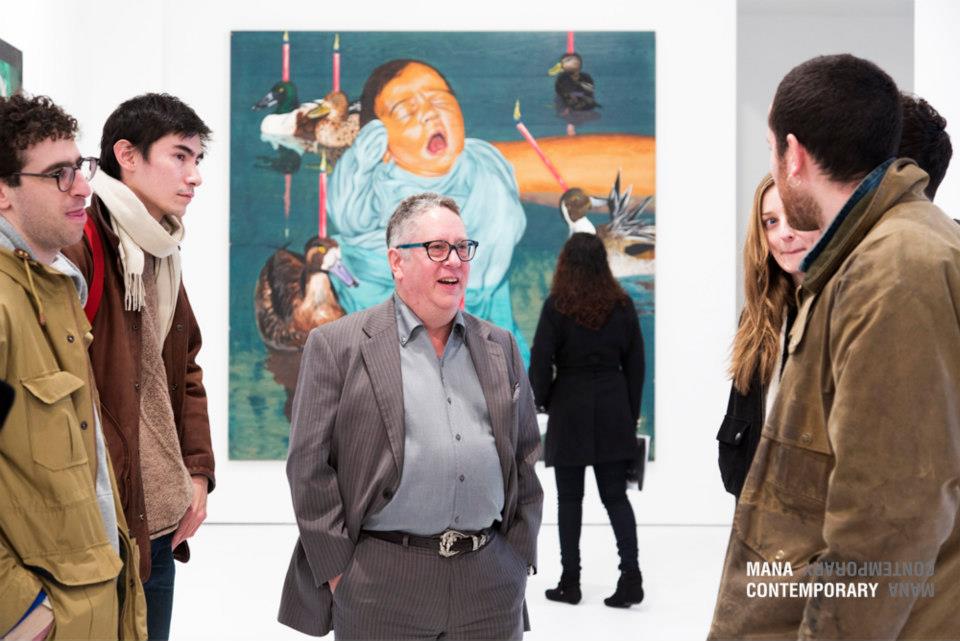 In today’s fast-paced world the nature of identity is often the subject of extensive personal and theoretical inquiry.  As the realities of globalism unravel traditional concepts of culture and society, hybridity emerges as a phenomenon marked by the constant need to adjust or assimilate conflicting identities.  Within the realm of art, the study of hybridity has led to the development of complex symbols, novel modes of expression, and cutting edge techniques combining traditional and new media. 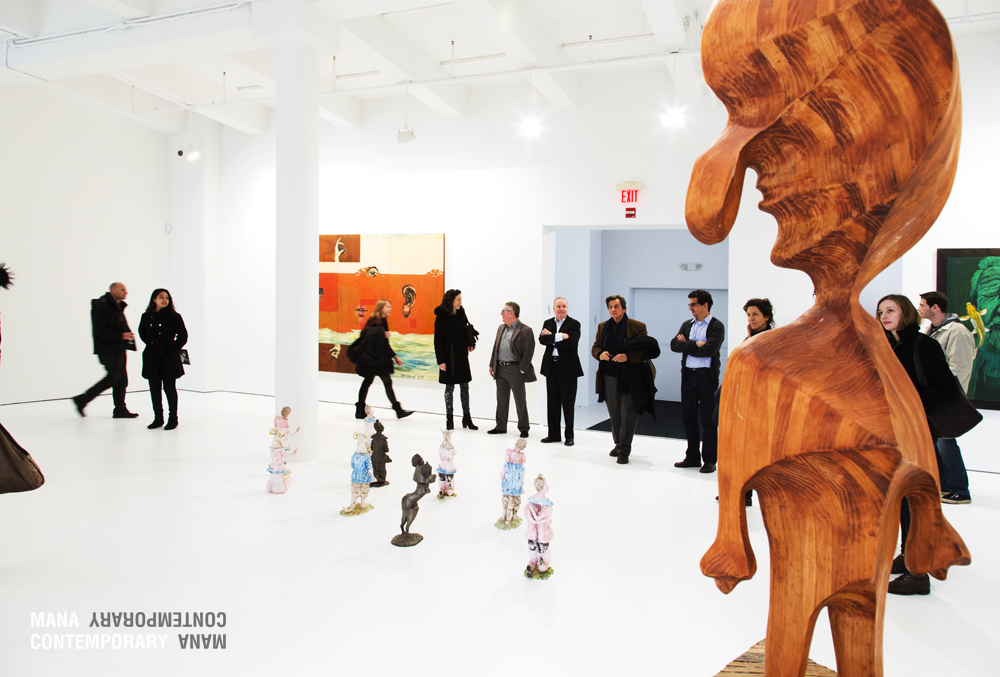 Ray Smith: Here | Now underscores hybridity as a seminal theme in the life and work of Ray Smith.  Displayed throughout four floors of gallery and exhibition space – both conventional and unconventional – the exhibition is a testament to Smith’s bi-cultural heritage and the manifold of influences that shape his identity.  Notions of duality and multiplicity undulate in various forms throughout his prolific work, from collaborative activities to the method by which he constructs his enveloping paintings, as well as the dialectic tensions they imbue. 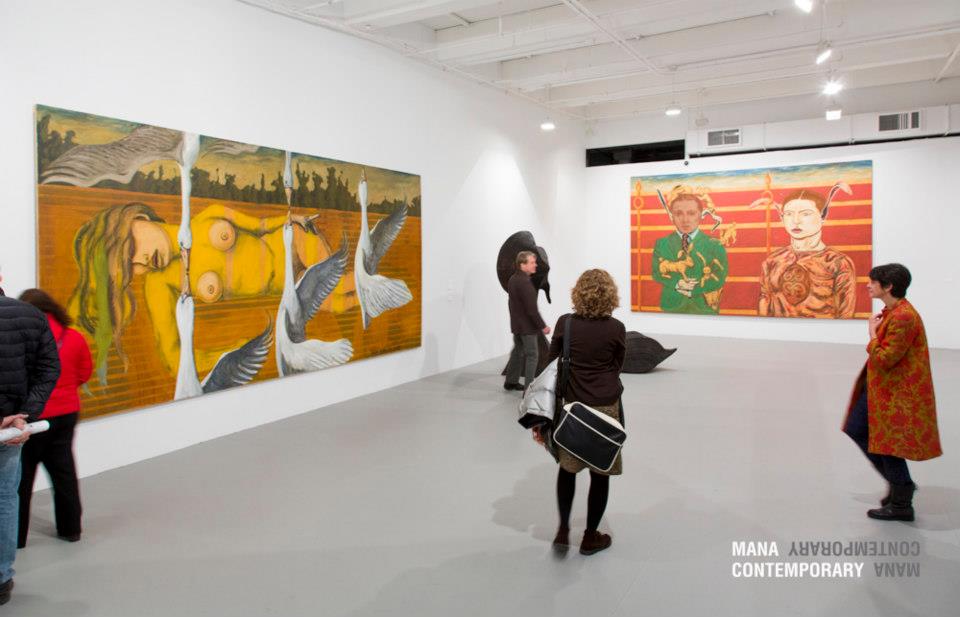 By tapping into a collective memory, which both is and isn’t his own, Smith threads an uneasy line between familiarity and distance, skirting prevalent post-Pop imagery and entertaining representational ambiguity between exotic and Modernist tradition.

From the onset of Smith’s life he has been the child of two countries.  Shortly after his birth, in Brownsville, TX, in 1959, his father Raymond Smith crossed the border into Mexico to have a second birth certificate issued for his son.  He grew up in both Mexico and the United States, a fact made clear by the flawless precision in which he meanders between English and Spanish.  He studied painting in Mexico City under the tutelage of a local artist, yet he considers himself of his contemporaries, Smith rejected the conceptual-minimal aesthetics of the 60’s and 70’s, instead opting to – in his own words – “include everything.”  The enormity of Smith’s work recalls the tradition of the great Mexican mural painters, namely Jose Clemente Orozco, Diego Rivera, and David Alfaro Siqueiros, while his method of production speaks to his ingenuity and resourcefulness.  Using oil on wood panels, often mixing wax and other an autodidact. Like many materials, he is able to compose large paintings that are easy to assemble and transport. 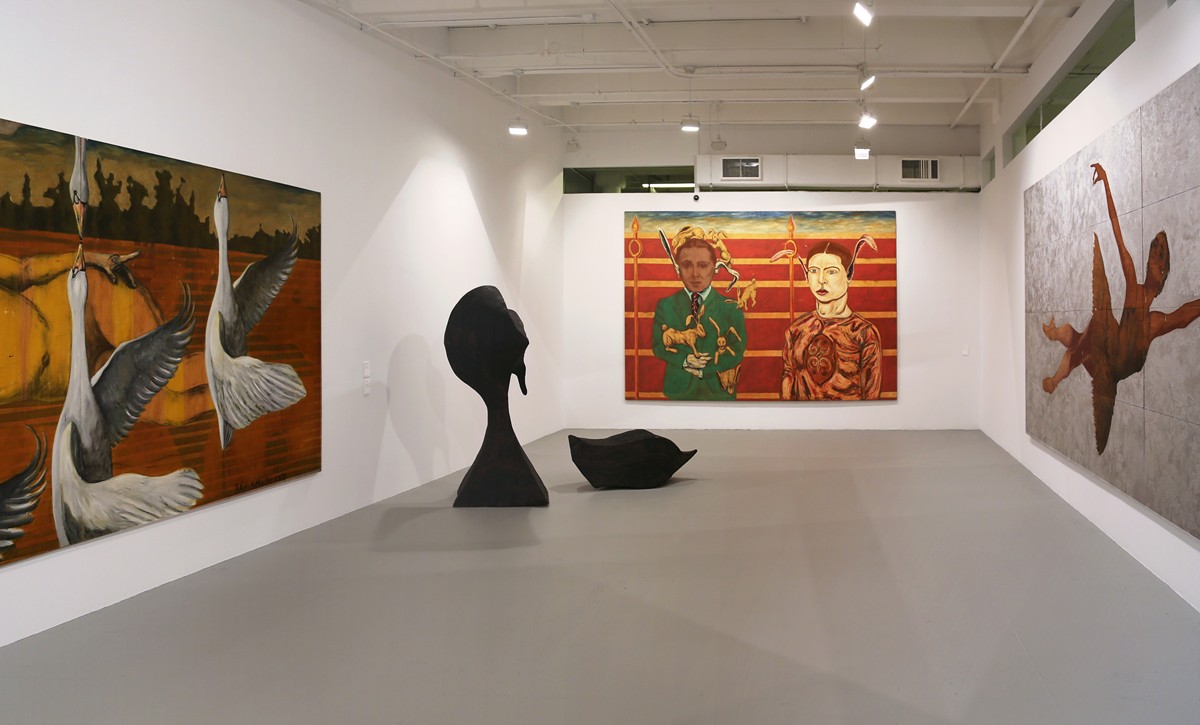 In 1983, Smith moved to New York where he established a successful studio practice.  The scale of his work prompted him to hire assistants, introducing a facet that in time would become a cornerstone of his practice, collaboration.  “Some of their talent would end up in the work and some of my ideas would be altered by the presence of other people in the studio.”  An example of this can be seen on the first floor of the exhibition with Smith’s most recent Cadavre Exquis paintings.  The series was made in collaboration with his assistants as a game to capture the spirit of the studio.  It features 27 paintings comprising of 108 individual panels, which draw upon a technique invented by the Surrealists to collectively compose an image.

This blurring of boundaries further extends to Smith’s relationships with collectors, with whom he often strikes close friendships paralleling familial bonds.  The aforementioned Pellizzi is a lifelong friend and collector of Smith’s work.  His collection comprises of seminal pieces such as the Guernimex, an appropriation of Pablo Picasso’s Guernica, which symbolizes the atrocities of war.  It also includes personal portraits, such as Aurora, a painting of Pellizzi’s daughter.  The ESKFF Gallery on Mana Contemporary’s sixth floor presents these pieces as well as many of Smith’s private collection, which include paintings of his wife Maricuz, whom he married in 1982, and his three children, Mariana, Bruno, and Cecilia. Also, Pellizzi’s son G.T. Pellizzi is a former assistant of Smith’s, and a recent collaborator on a series of paintings and sculptures called The Execution of Maximilian:  Border Paintings, one of which can be viewed on fourth floor. 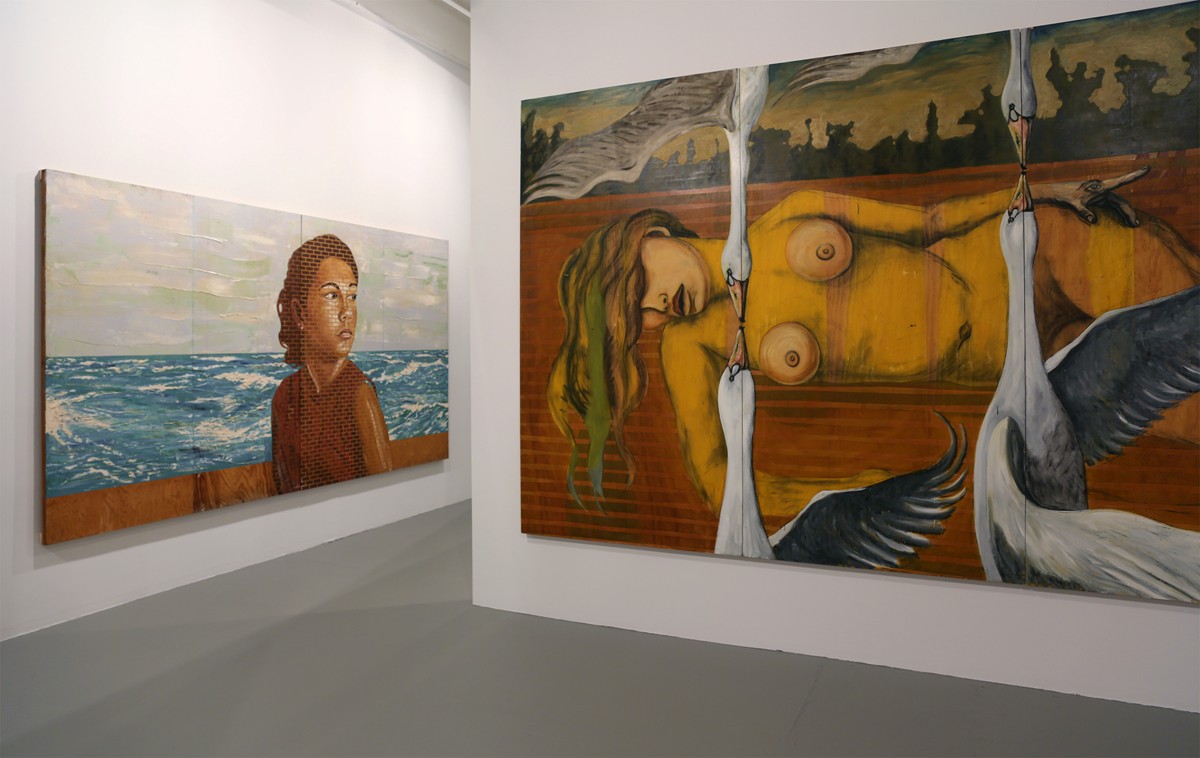 Yet, the most significant manifestation of hybridity can be attributed to Smith’s artistic persona.  He transposes his feelings of displacement into the arena of art where he can actively address them. Early in his career, he realized that his American name combined with his Mexican imagery were at odds with one another.  “Ray Smith seemed to have nothing to do with the painting that was being signed by Ray Smith. It looked like some lunatic had come and written their name down at the bottom.”  He adds, “I really couldn’t figure out what the identity of this character was.  So Ray Smith in a sense was perfect.  Because, he was a character that wasn’t exactly me, he was a border rat.”  Smith’s early work embodies Mexican themes and influences, whereas after 9/11, his paintings reveal a shift toward American propaganda, e.g. the monumental painting Ghosts on fourth floor depicting a collection of rifles, and Tex Rex on first floor, which features famous stuntman Rex Rossi, whom Smith first met as a child and again as an adult.

Furthermore, the title of the show refers to the world of dualities Smith inhabits, yet it also hints at the condition of his Gowanus studio, which in late 2012 held five feet of floodwater in the wake of Hurricane Sandy.  Now characterized by the relationship of before and after, the majority of the works on view were retrieved from the studio. Several required restoration, yet most carry very little signs of damage. 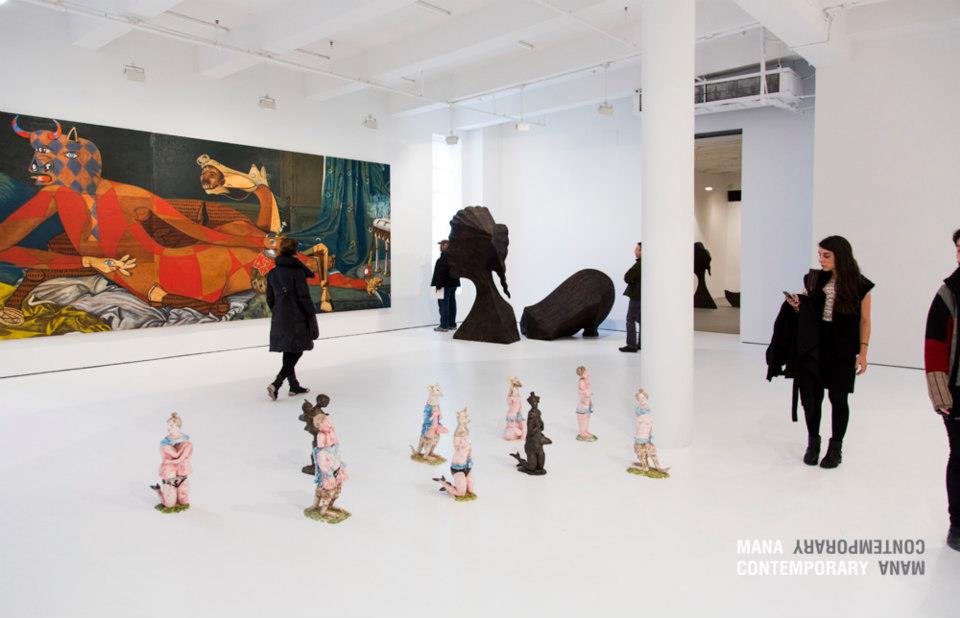 While hybridity may be the result in the confounding sense of self, it is also the process by which we evolve.  Therefore, leads to fascinating new concepts of life that rise beyond a singular dimension of interpretation, wherein animals live as humans, artworks have many authors, and artists carve their own realities.

Ray Smith:  Here | Now opened to the public, Sunday, March 3 at Mana Contemporary.  The exhibition is on view through May 2013.

Mana Contemporary will have a closing party for Ray Smith in the Beer Garden with live music from 1-7 p.m. on May 4.  Visitors will also be invited to view Smith’s studio at Mana to see the artist and his collaborators’ work in process.  The closing party will coincide with the opening of three new exhibits, on view throughout the summer. 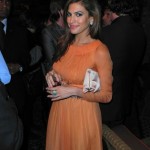 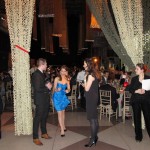