It’s around 8pm and allegedly Autumn in New York City. Mid-September normally marks the season of good weather, high fashion and a break from the sweltering humidity of August. But it feels like winter this year might be coming early since the nights are already chilly. I bundle up, grab two cameras and head off to meet James Huddleston, a British transplant to New York. We are not meeting at his recent acquisition PRAVDA, a staple of the city for over 20 years originally founded by Keith McNally (another Brit). We scheduled the meeting at Mendez Boxing just off of Madison Square Park. Not your average meeting spot, but James isn’t your average foreign born chap looking for a job in the USA. Having carved his path out since he was a kid, he does things differently on a regular basis. Growing up in England he found himself training as a boxer before he even hit his teenage years. A gentleman through and through, his natural ability for self defense would categorize him as a lethal weapon in most countries. An unusual trait for an entrepreneur in the nightlife field. The skills he developed in self defense with his already natural ability altered his life and put him in touch with his soul during his late teens. James explained this as a life changing experience.

“I had a close call in England where outside a club a couple of crazy guys attacked me. I then reacted and went into self defense mode. however, I really hurt them in the process of protecting myself. It made me appreciate life and the delicate nature of being human. after that experience I felt it was time for me to leave my hometown for a while and travel. I wanted to try to make a difference in the world.” 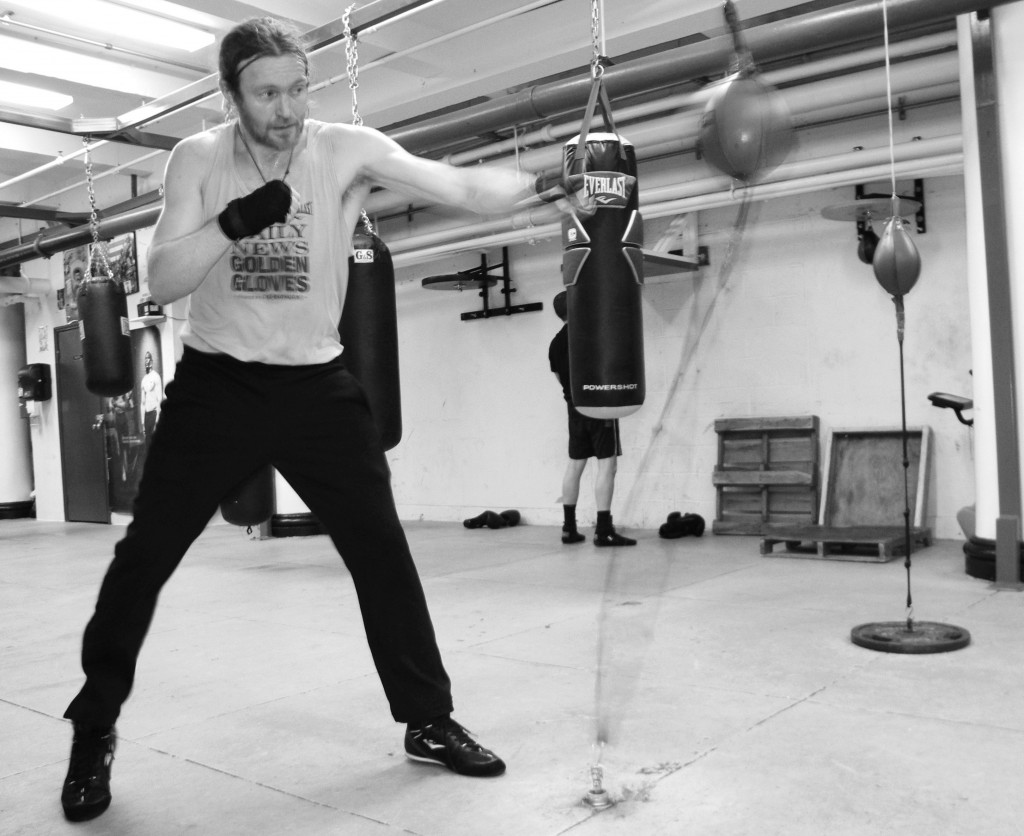 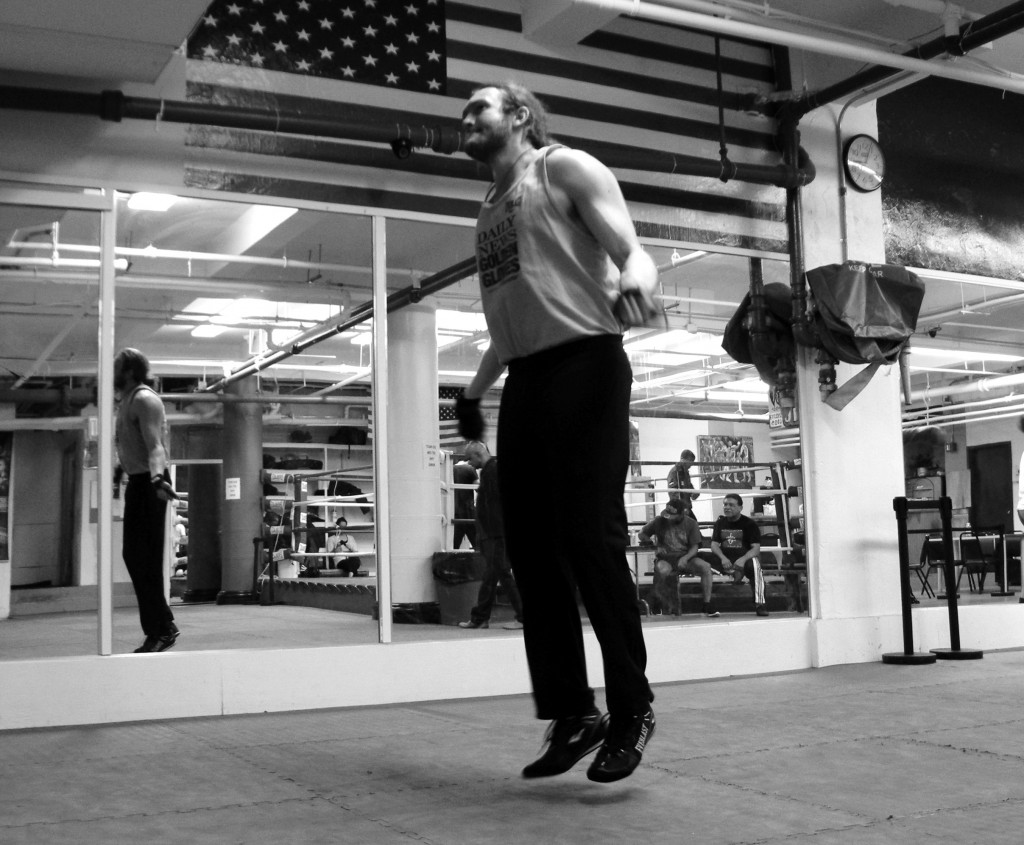 After listening to him speak about his past boxing titles which forced him to travel much of the world whilst building his boxing career, I found it interesting he spent a significant length of time in Nepal. It was in fact a “close call” with defending his life and an immediate eye opening or reality check that drove him to complete volunteer work in Banepa, located about 40 kilometers East of Kathmandu. He worked selflessly for over one year aiding children from poverty stricken areas. He then went on to Tibet to work in a monastery. Yes, it sounds like something out of a script for Hollywood movie or screenplay. But in fact it is real and he gained a lot from it. James says,

“This experience gave me a completely new outlook on life. It changed me as a person and really opened my mind. Once you travel and are exposed to this level of existence, it changes you. these kids in the Third World worry everyday if they will get something to eat and drink. i mean small amounts of food and clean water everyday, not a coca cola with a steak. many are born with terrible diseases, the type of illnesses that we get vaccines for free. They sometimes die because of the tremendous lack of the basics. It makes you realize how lucky everyday life is here in New York or in the UK. We are generally born with everything we need to live a long healthy life in the states or united kingdom where as many people in these countries are born into battle, just to survive the day. So I guess it makes me appreciate life more and generally need for less instead of excess. in the long run i want to make a greater difference in the world through the contacts and business I create. I’m not driven by money, more by the notion of looking back on my life and thinking, yeah I made a difference to some people. This drives me.” 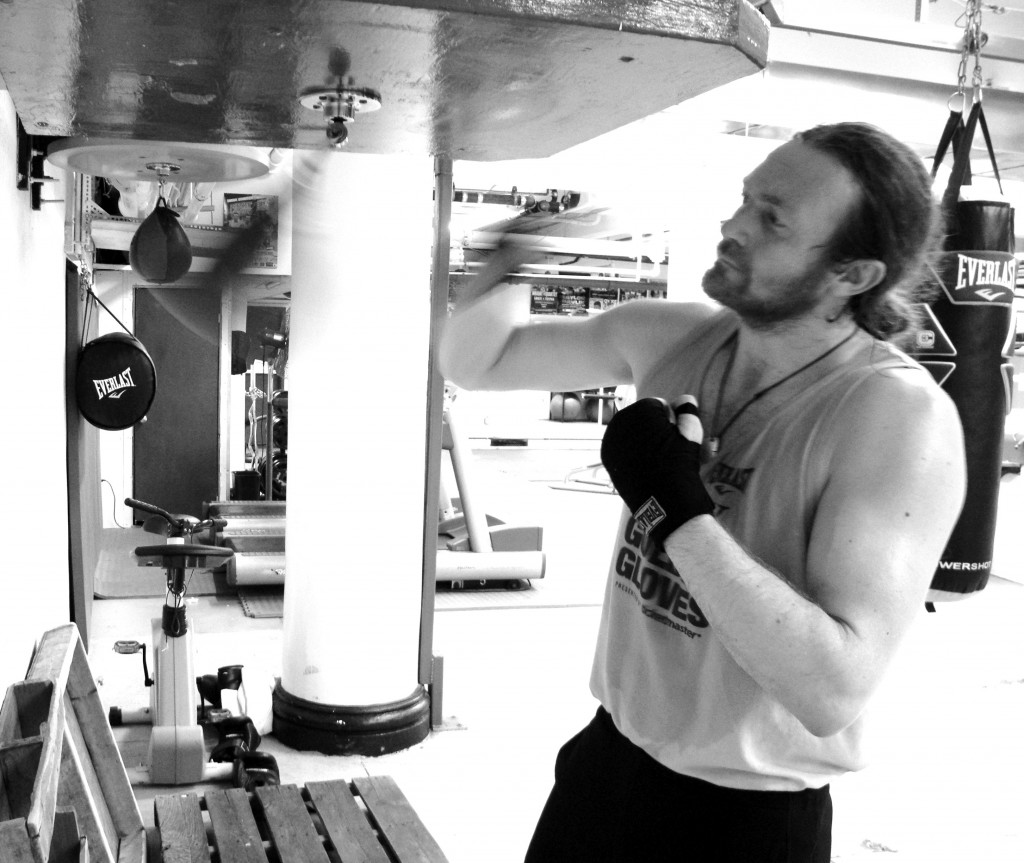 So how did the boxing start anyway?

“I grew up always getting into fights as a young kid and was always into contact sports like rugby and judo. I seemed to be always getting into scraps on the streets and come out on top no matter how big or old they were or how many. I had a natural desire to box and figured it made sense to go and get properly trained at it, professionally. No one really encouraged it other than my grandfather who was in the famous Chindits in World War 2. I started training properly and advanced. My coaches saw potential in me and encouraged me to compete. It did lots for me, gave me the confidence to travel the world and box. So yah, it has been a very good thing for me.” 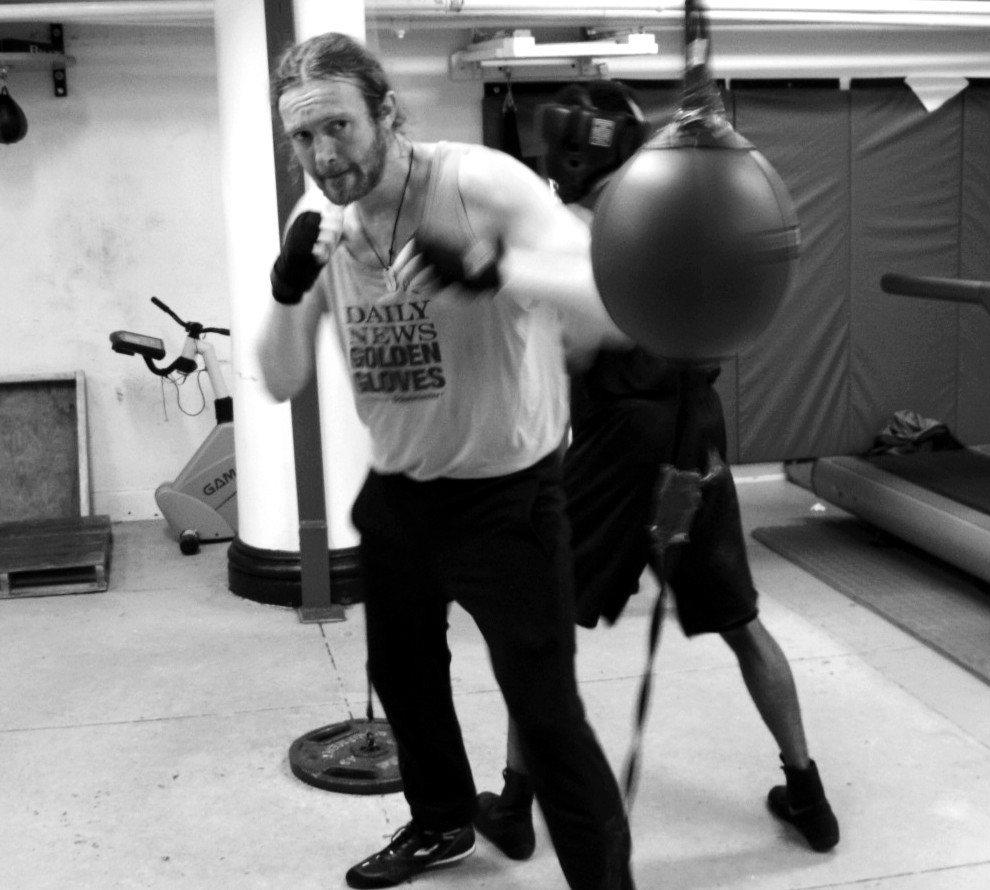 “I boxed all my life in the UK. Fought all over the world and with national teams in Colombia, Cuba and the best fighters in the world, learning the ring craft from them and coaches to better my skills. I did a boxing documentary on travelling and fighting in interesting parts of the world which was filmed in Colombia. I won a title and a gold medal in United Kingdom universities as a light heavy weight champion and was an undefeated heavy weight in golden gloves in the US.” 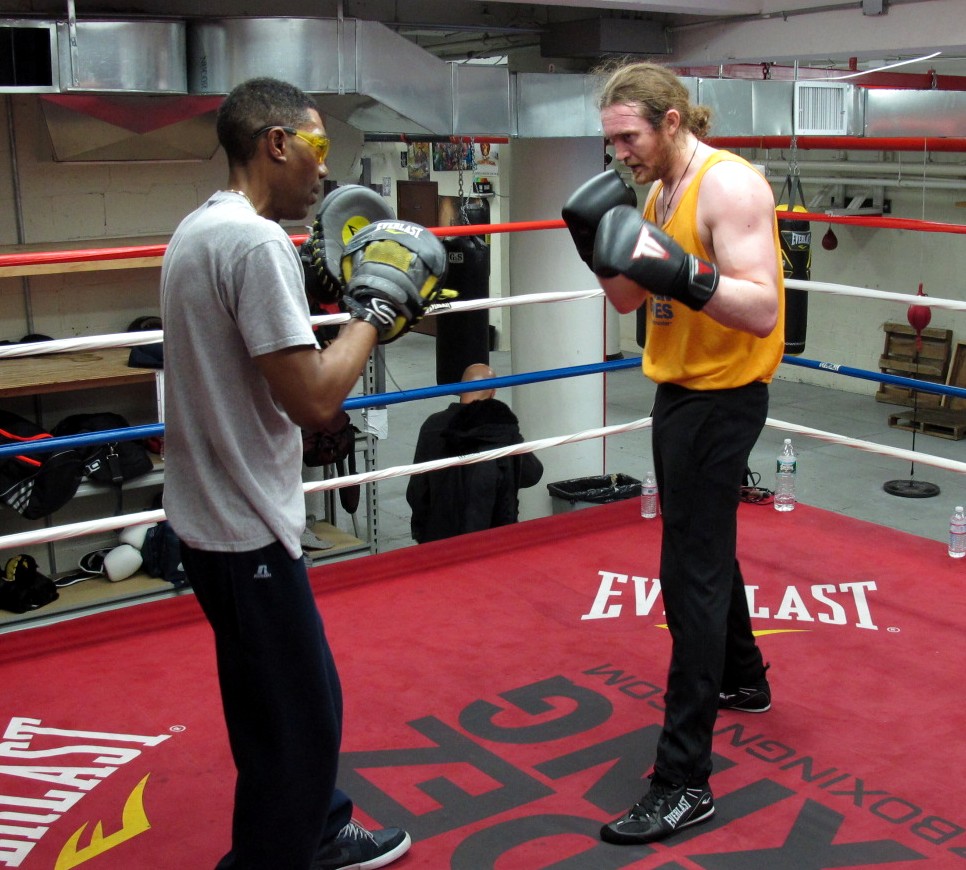 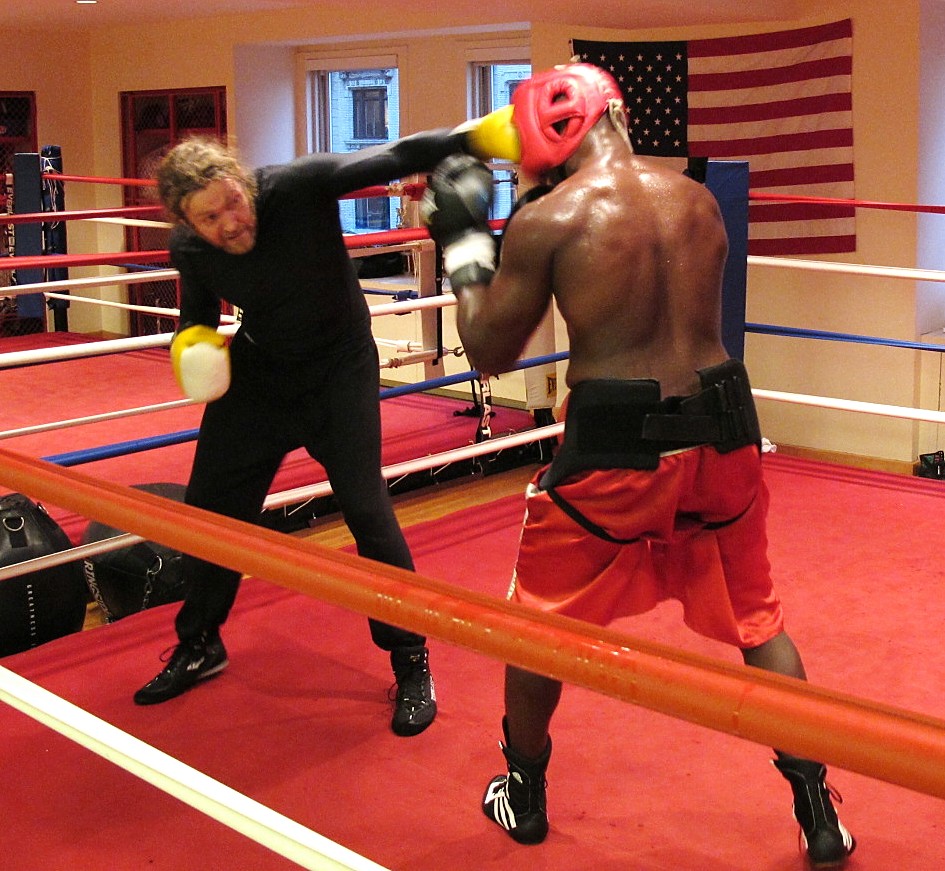 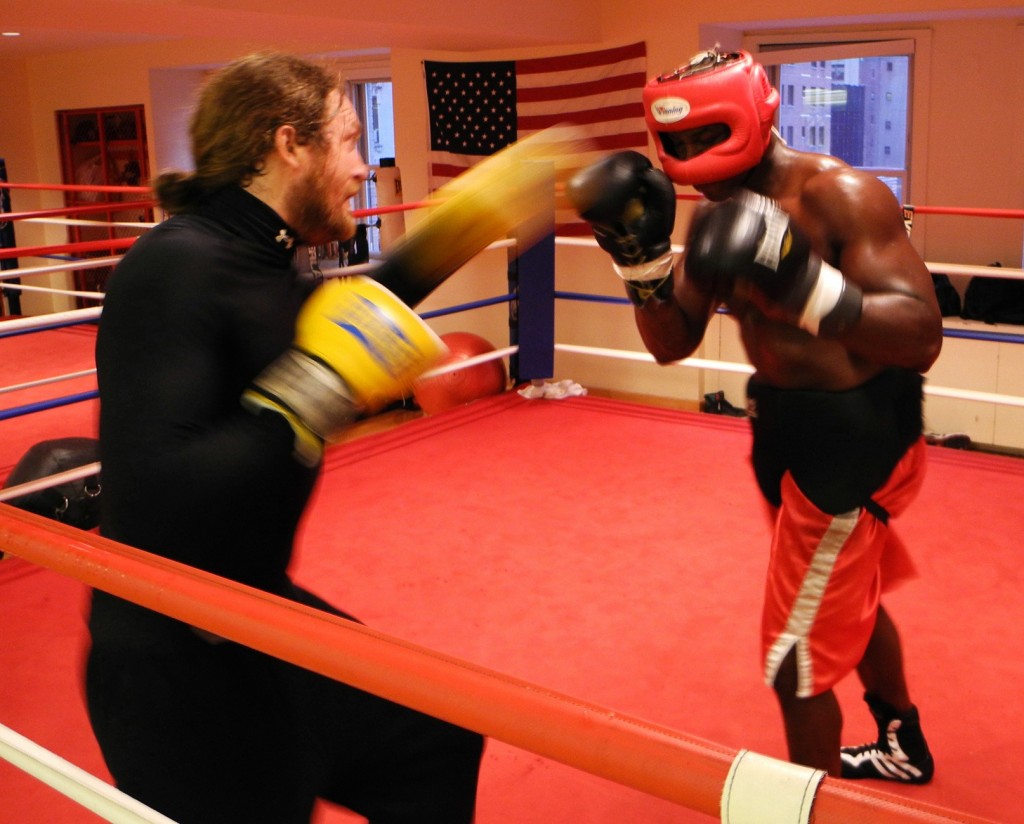 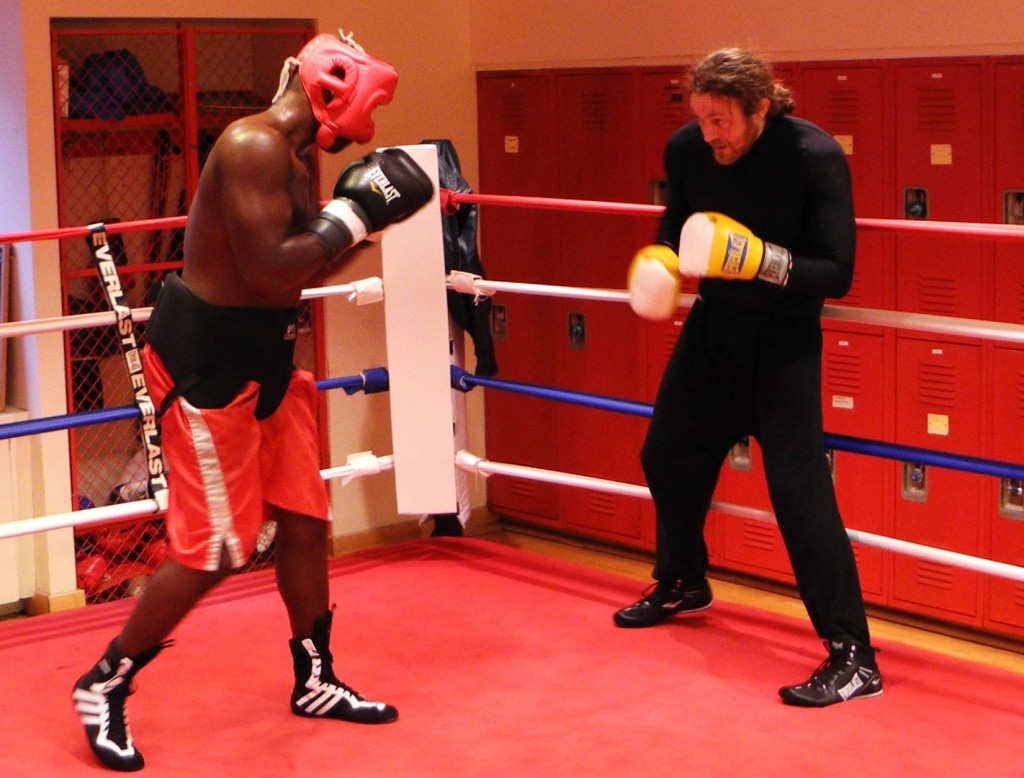 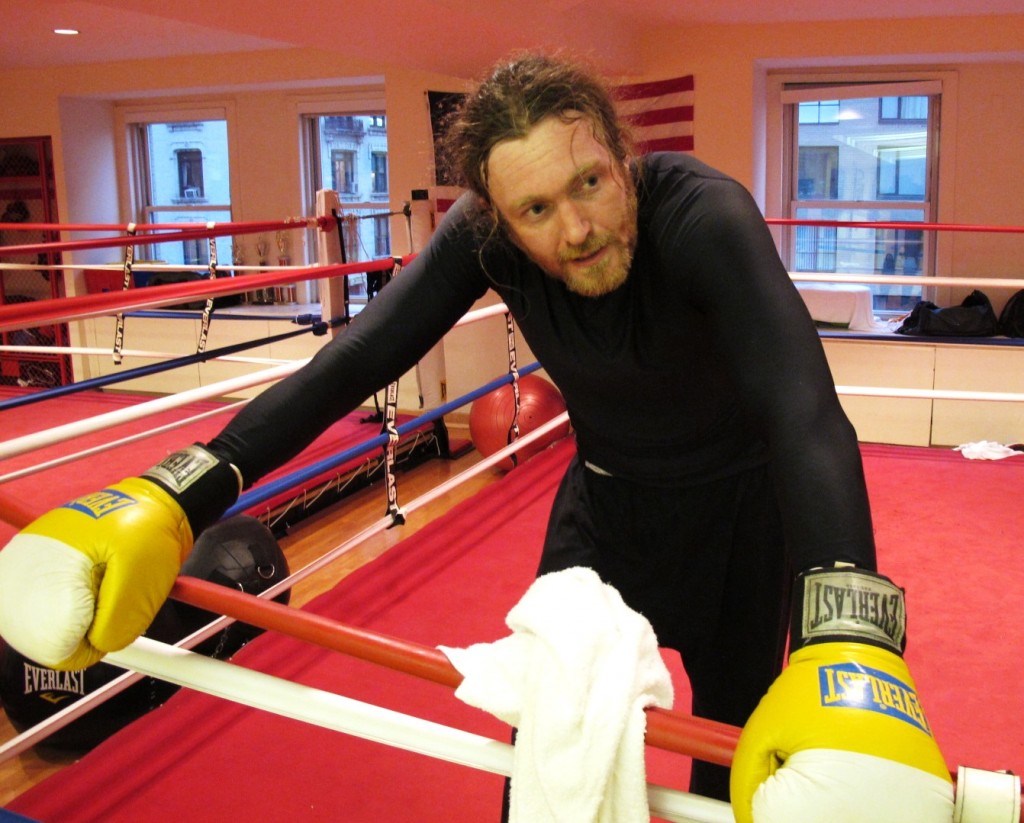 Many know James in the past through his VIP management of the Jane Hotel Ballroom. He ran the door services during it’s HOT – IN CROWD time. He was also involved with the VIP marketing arm of The Box, which he still frequents. Through the VIP world it makes sense that he used his likeable charm and fair, honest manner, to move into business for himself. What people do not know are his first class body guarding skills.

“Through boxing I moved into the security business as I had an interest in close protection. I always believed that training with the best leads you to become the best. for me, the Israeli special forces are amongst some of the best worldwide. so, I flew to israel in search of a combat specialist. the result was successful as I was trained by itay gil. i learned skills such as knife training, weapons training, close combat, various firearms training and thoroughly in krav maga. i was also instructed on the etiquette of working with vip’s. This gave me an advantage over lot of other people who train in close protection. after all, there is a level of trust or confidence in a body guard that the client possesses. I did my best to make them feel that level of safety”

It appears that same confidence and giving nature possibly moved him forward with an evening venue. His first venture has been the co-takeover of Pravda which previously mentioned, has been a destination since the mid 1990’s. It suits his personality as one of those rare places in New York where people like to frequent rather than a quick flash and burn. Located in the chic Soho district tucked away underground away from the hustle and bustle of shoppers. The venue still retains its mysterious and swanky vibe. 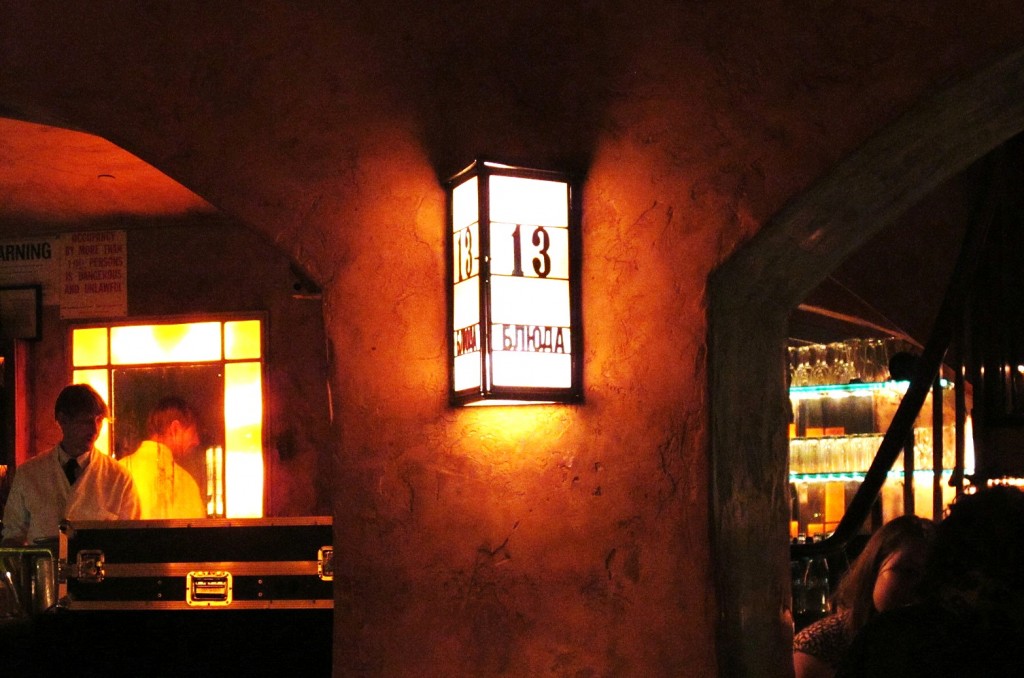 Since the take over Pravda, James now has his most important VIP assignment, the protection of his own future. It’s not as difficult as knocking down 225 pound boxers since it does have a long track record, but it still needs some good work in the ring from him. With respect to New York and the nightlife/bar/club/restaurant scene (did I miss anything?) I find there to be a LOT of competition which spawns various emotions and thoughts about its participants. I asked James what he thought about Pravda.

“There’s not been much PR on the transition of Pravda yet, but yeah, the rumors are spreading that I am involved. people are for and against you anywhere i think. people in general have been kind to me as i am very much a giver. Raising money and getting the liquor license was a real challenge but I’ve got a great team of people behind me who know really believe in me.” 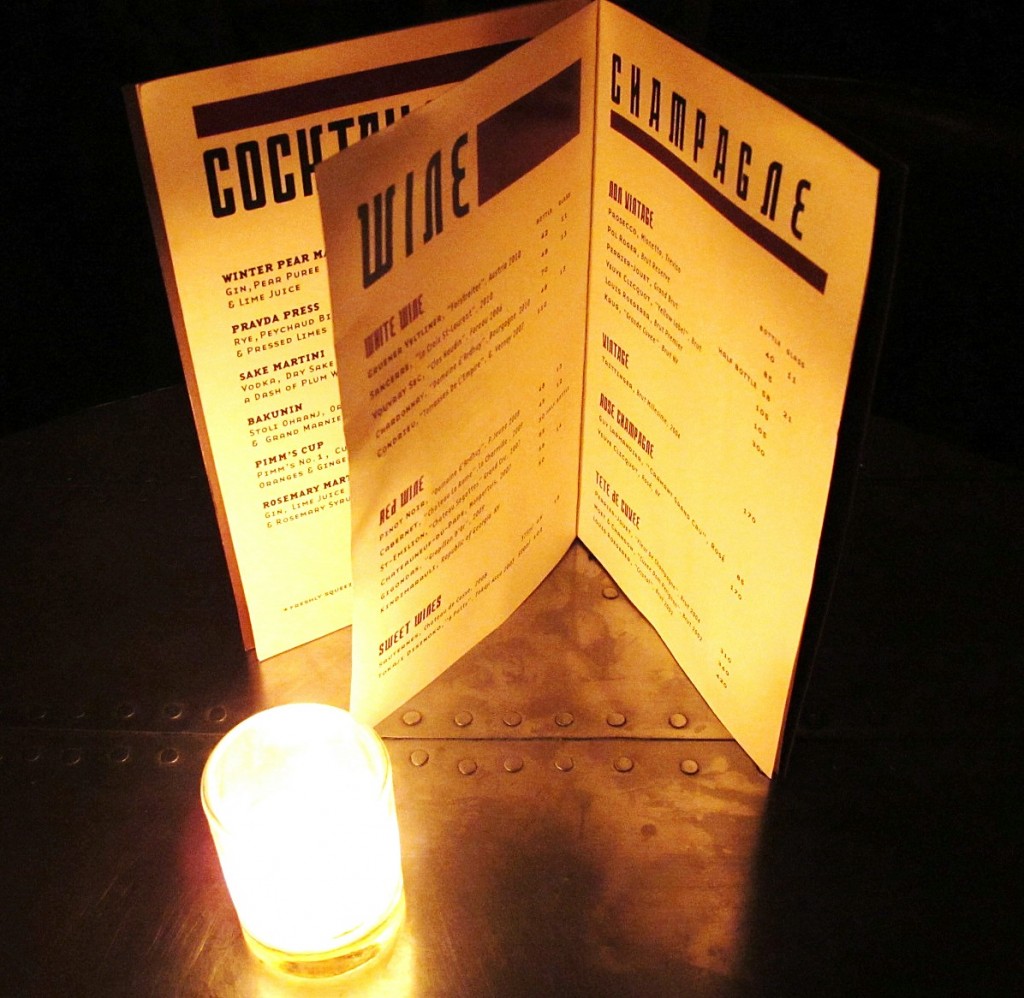 James seems to be just as focused building his venue as furthering his boxing career. He has been recently entertaining the idea of becoming involved with venues outside of the United States to build the Pravda brand. With a smile of humble mischievousness, James seems more than comfortable with his plan and day to day “wake up and get it done” attitude. From the perspective of an outsider, I can see that his name has carried a considerable amount of clout while marketing Pravda as again a place to be dining and mingling. 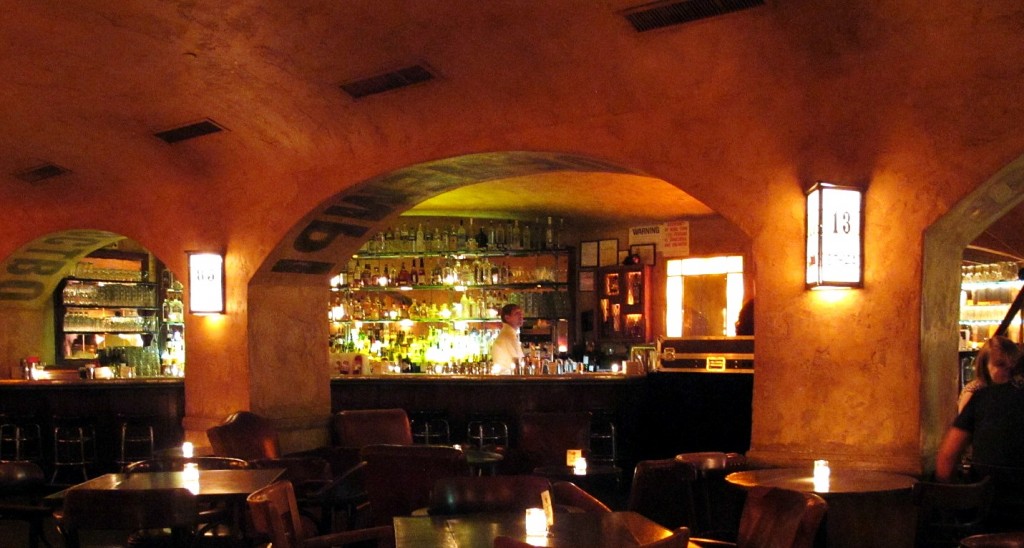 After sipping on several glasses of Saint-Émilion (so glad they have a nice Bordeaux) wine and nibbling on some French fries, I asked him what he thought about the future and how he sees it playing out. 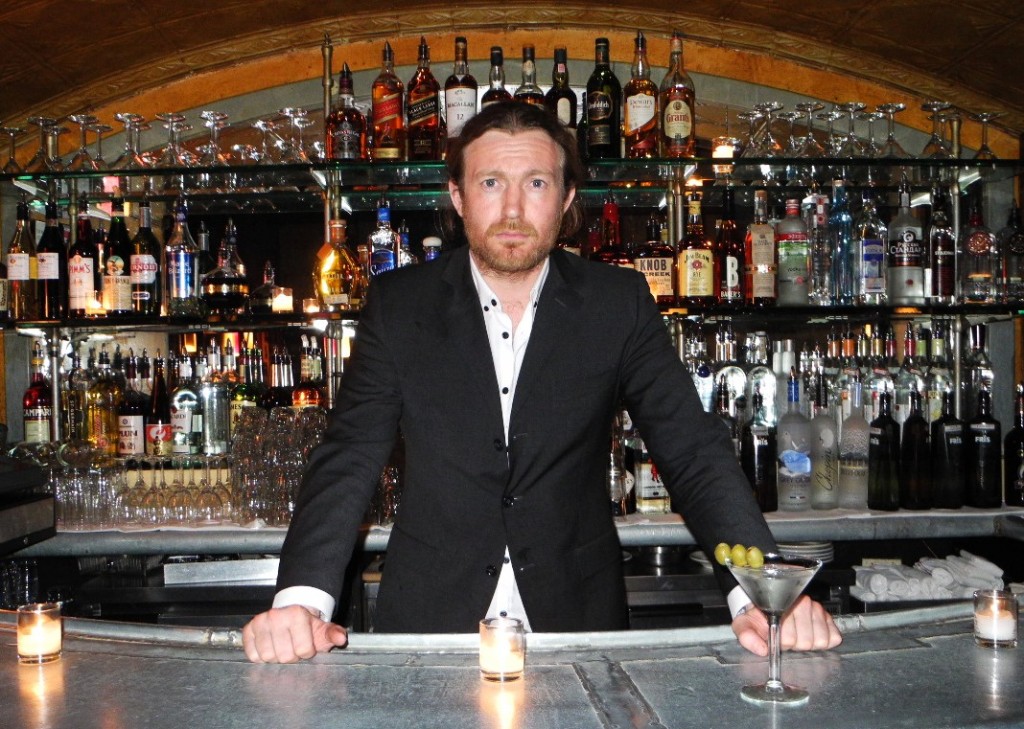 “Take each day as it comes. as long as I keep enjoying the boxing I keep dong it, although a short pro career is definitely on the horizon and who knows? a title that’s where my dream is but eventually it will be more close protection and the bar world. who knows? Maybe even being in a couple of movies. haha!”

I agree with the movie aspect as his life can certainly be examined in further detail for a unique script. The gentleman boxer is making his solid mark in New York and we see no signs of him slowing down. Entrepreneur who is socially connected, but comes from a solid work ethic and determined. All of these characteristics combined could be even more dangerous than his punch. 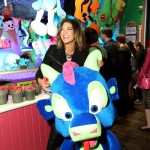