Ohad Maiman is an expeditionist who not only circumvents the globe, but the mind and spiritualilty itself.  He creates art with personal meaning of “moments”, yet identifiable for all.

I was introduced to Ohad, by a mutual friend, at his artist loft over cocktails and later found myself bumping into him several times per month at various exhibits or events.  A well dressed and charismatic individual who is soft spoken and speaks with a wisdom about life, spirituality and doesn’t strike me as one for small talk (I could be wrong).  Curious as to where and how he developed his talents I wanted to find out more about what makes the clock tick.  “I was in the Israeli army about 14 years ago, pinned down in the West Bank in an alley.  We were surrounded, being bombarded by stones and various objects.  We were waiting a very long time for reinforcements.  I was in a safe hole and just began sketching to pass time and kind of document the moment. The following weekend I went to see my mother and asked her where I could find art supplies.  She took me to an art store and that’s how it began.”  I asked him if the threat of attack had triggered his drawing, perhaps some by-product of heightened emotions.  “No, my senses were alert of course.  When you are in that sort of situation you are going to be alert.  But the fear or reality of the situation is mainly before the conflict, when you leave the base and when you come back and start thinking about what could have happened.” 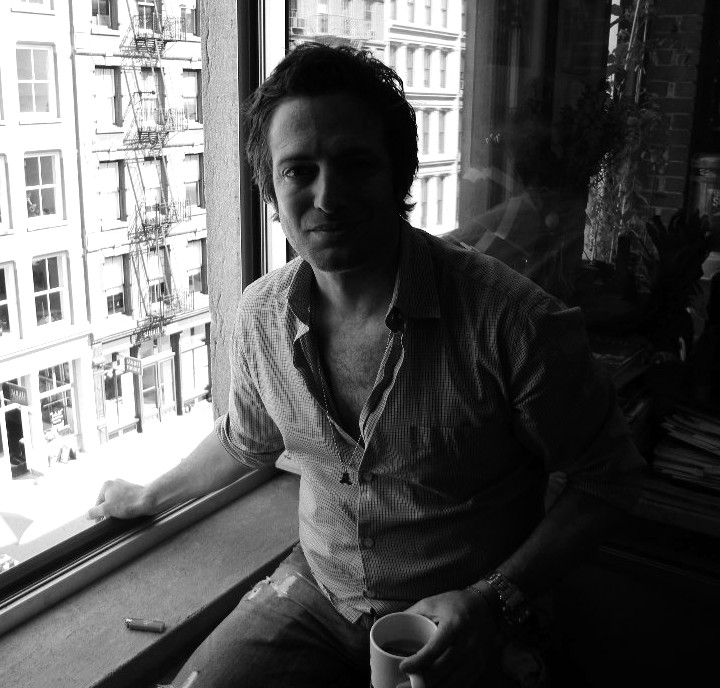 From the West Bank to West Broadway, he finds safety and creativity in his home loft

Amazing story of a youthful soldier on the brink of his artistic journey.  And that journey began soon after he finished his military service.  He went for more than 6 months travelling throughout Asia:  Nepal, Combodia, Thailand, Japan, China, Mongolia, etc. and documenting his travels both mentally and through photography.  He also travelled throughout Latin America years later and various parts of Oceania and Africa.  But straight from Asia and post army tour, he came to New York almost in hippy fashion to attend university.  While at school he refined his photographic skills further and began putting his works together.  These artistic works all came to fruition in 2008 when he published his photographic book entitled “Theory of Wants” which he defines as “capturing unfiltered moments in life.”  He is trying to compare various states of being.  None of the photos in this particular book were manufactured poses or instructed but actual people caught by his and the camera’s eye, raw – a frozen moment. 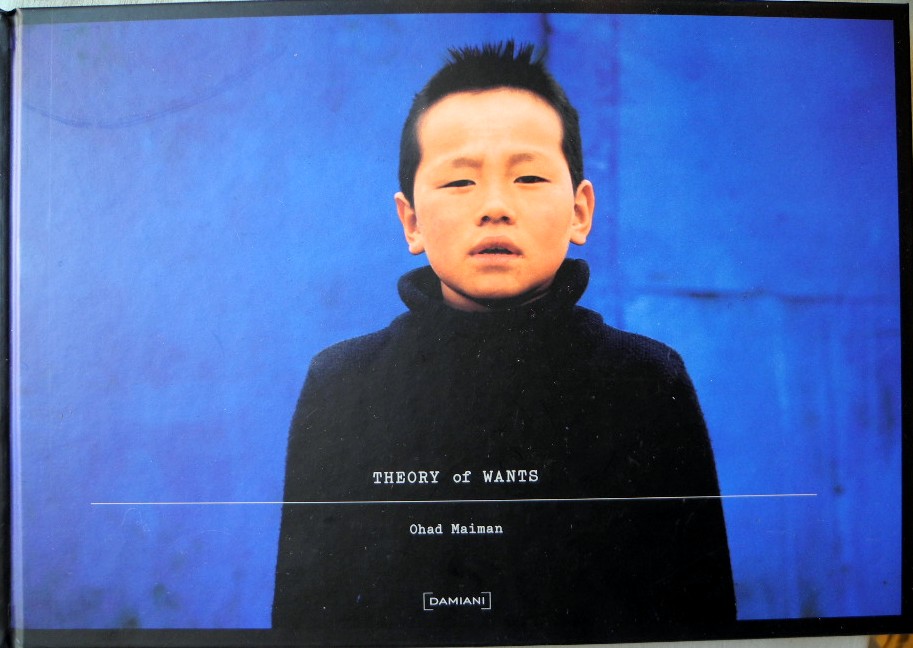 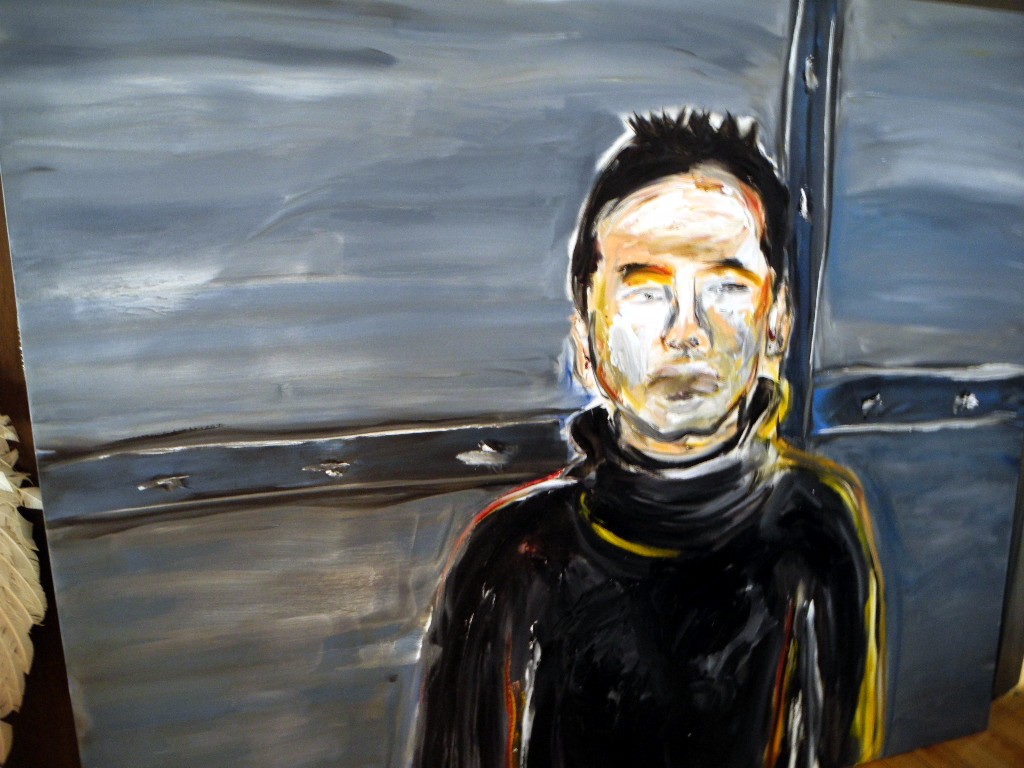 Paint on canvas of the prior photo image, book cover 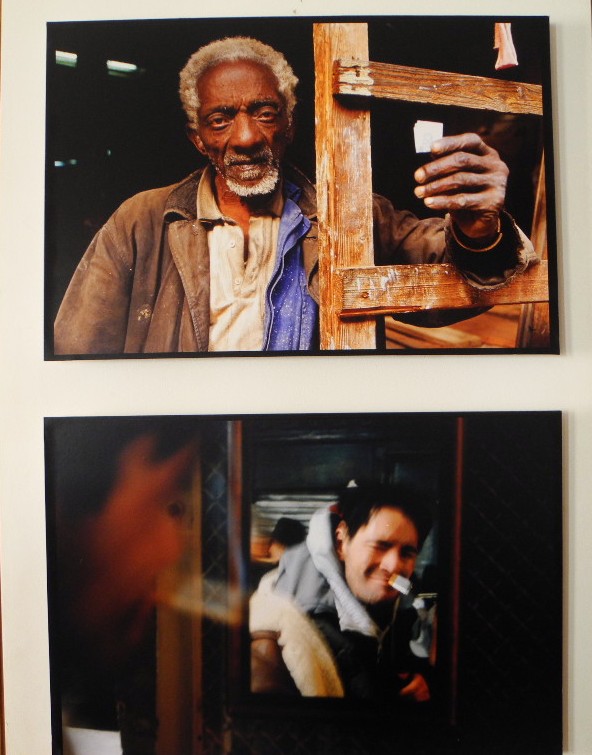 An unfiltered moment above in Cuba

His art has various layers.  Ohad often paints on a photo, then re-shoots the photo that has been painted, creating the “original” for a series of no more than 20.  In the series he will diversify in sizes.  Why?  An artist but also a businessman, it allows different socio-economic levels to acquire his art.  He doesn’t want to limit the appreciation of a patron by financial restrictions.  Like many artists he wants to share his art with those who are truly captivated by it.  For him, some of the validity of his work comes from the deep appreciation of indviduals who acquire his pieces. 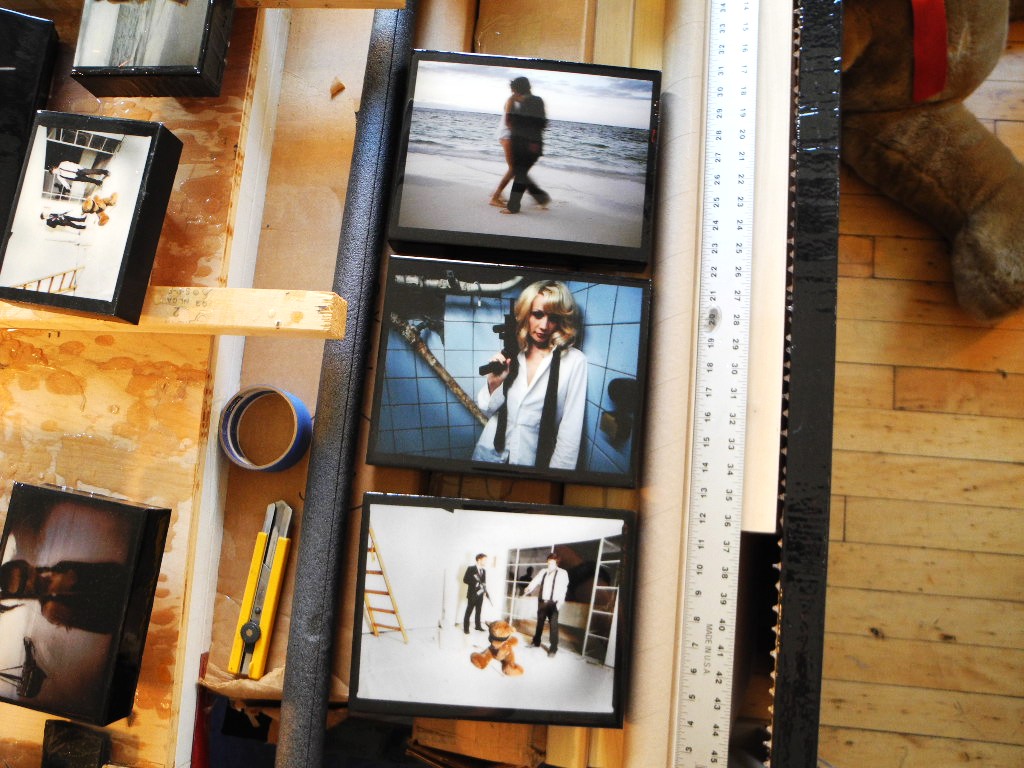 Smaller pieces in the works – variety to his series 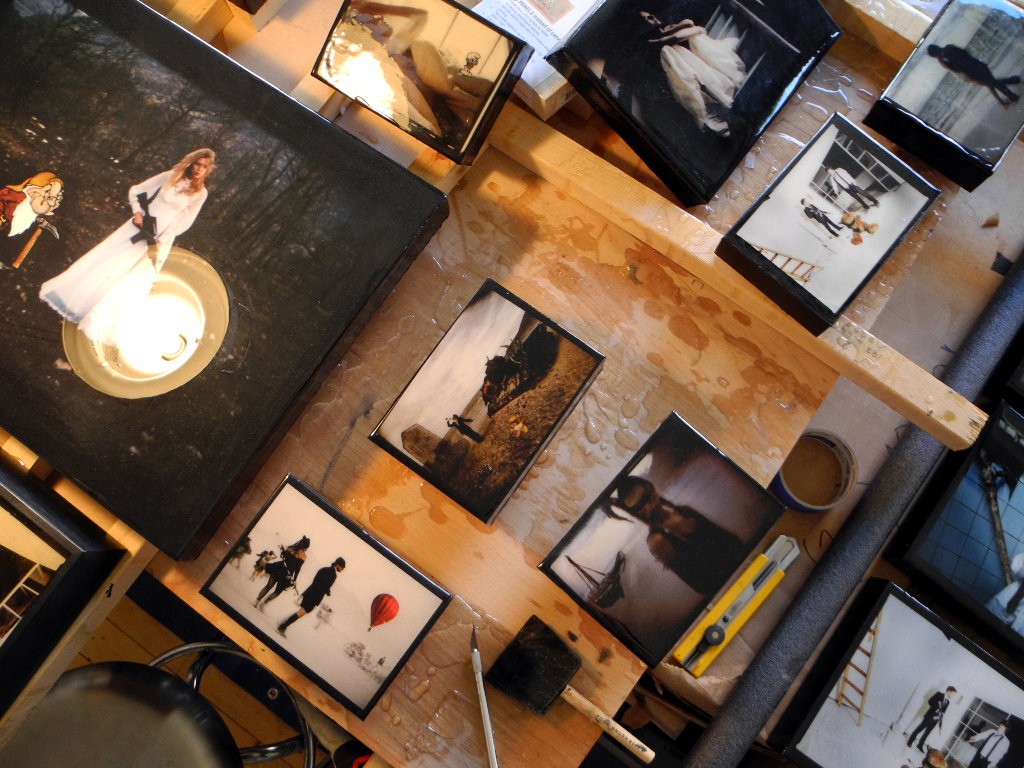 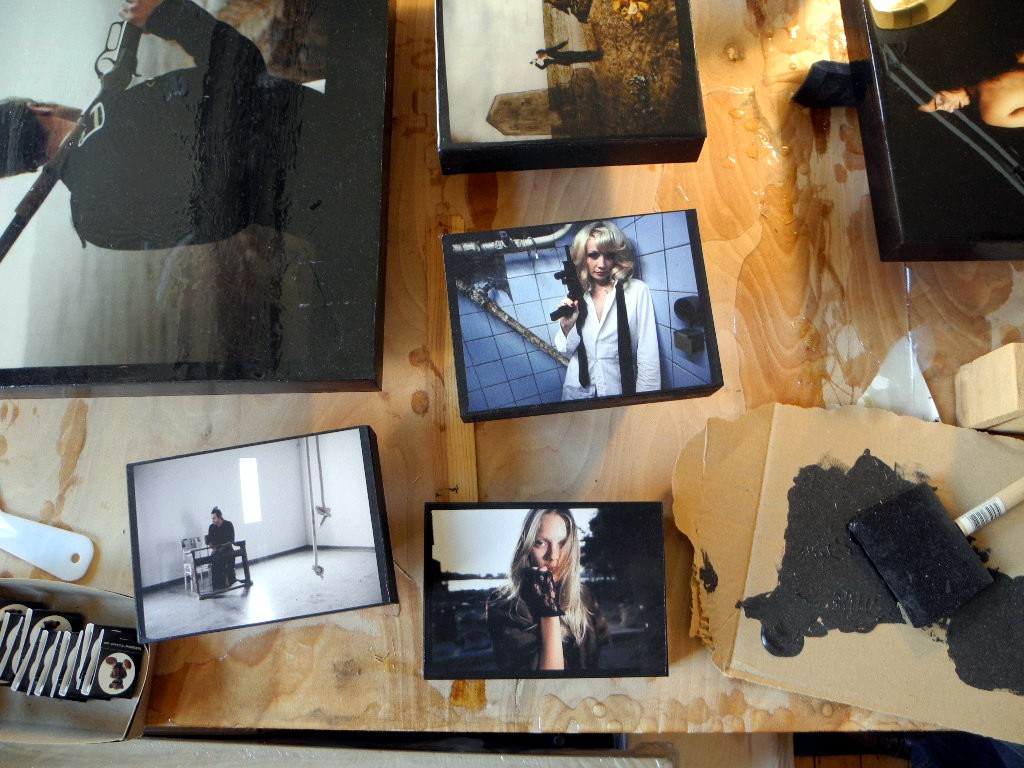 Much of his art incorporates as he stated, “personal issues”, where he believes it is important to keep a step or break between them and the actual art form.  He doesn’t want the art solely to derive from his past or present issues which could limit the understanding or appreciation of the pieces.  Ohad expresses the importance of the general public to be able to identify with his creations.  He prefers to take photos and add paint later, which seems to be his focus.  Although he did express it might be time for another transition.  He tries to do one “experiment” per day.  With photos, he can recreate over and over.  With the paintings on canvas, once it is finished, there is no altering it for him.  If he becomes attached to a piece, he finds it difficult to let it go, even for what may seem like the right price. 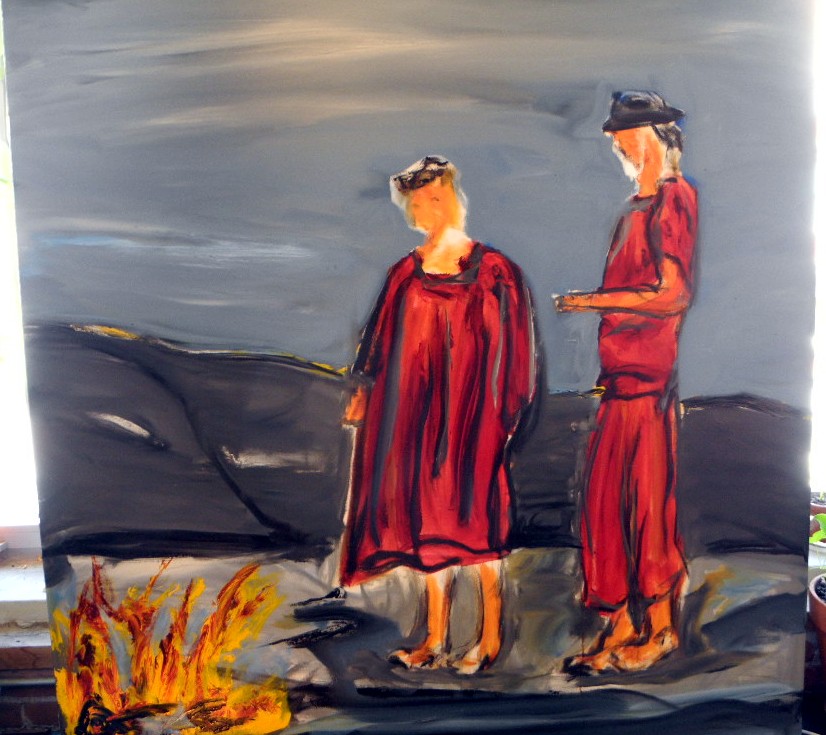 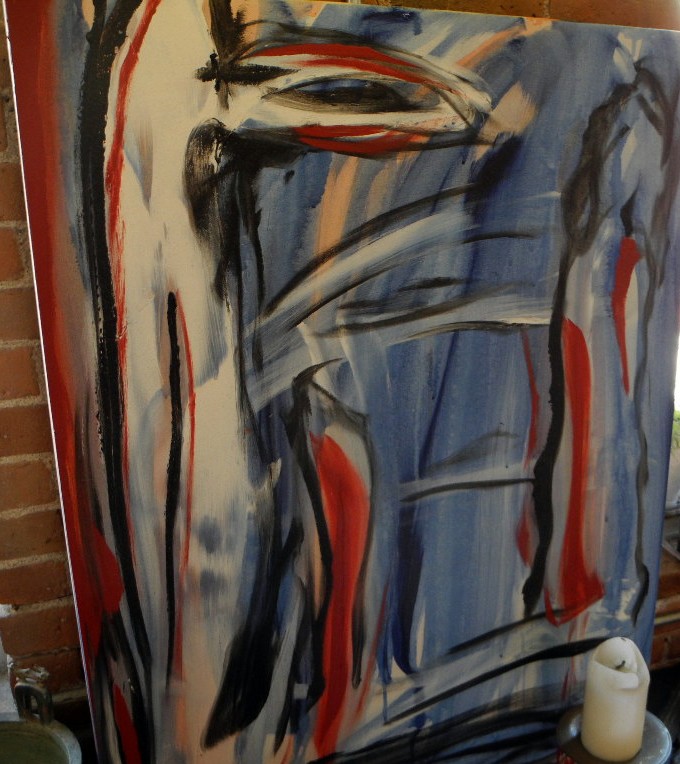 Very unique piece, perhaps an “attachment” as it is situated in a unique spot

Another personal element he incorporates in much of his art is his muse and girlfriend Merily (who recently started making hand made high end cashmere and wool garments as well as home design pieces.  Together they have been building the business by appointment as there is much demand).  Many of his friends and Ohad himself (as well as one stuffed Teddy bear blindfolded), appear in his pieces.  Much of this is reflected from his collection “2 Klicks South of Wonderland” which was featured at the Richard Young Gallery in London, United Kingdom (images further below as well as a video interview).  He likes to “tinker” with photography because as he said, “anyone these days can take 5 photos on Instagram these days and get a great shot.”  Ohad explains it as the “death of photography as a skill” and he brings his other artistic skills to his photos, melting them together.  He began blending his skills roughly in 2008, hence the reason he feels perhaps a new change is on the horizon, a 6+ month off-the-grid journey.  I’m sure whatever he comes up with next will only further or strengthen his creativity. 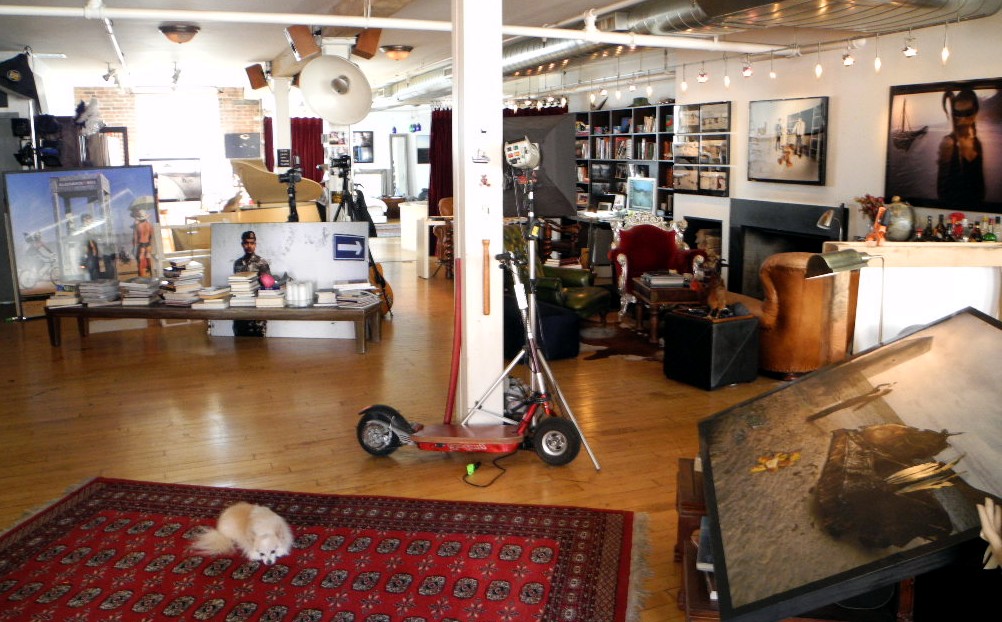 Ohad lives as he works, surrounded by art and creativity 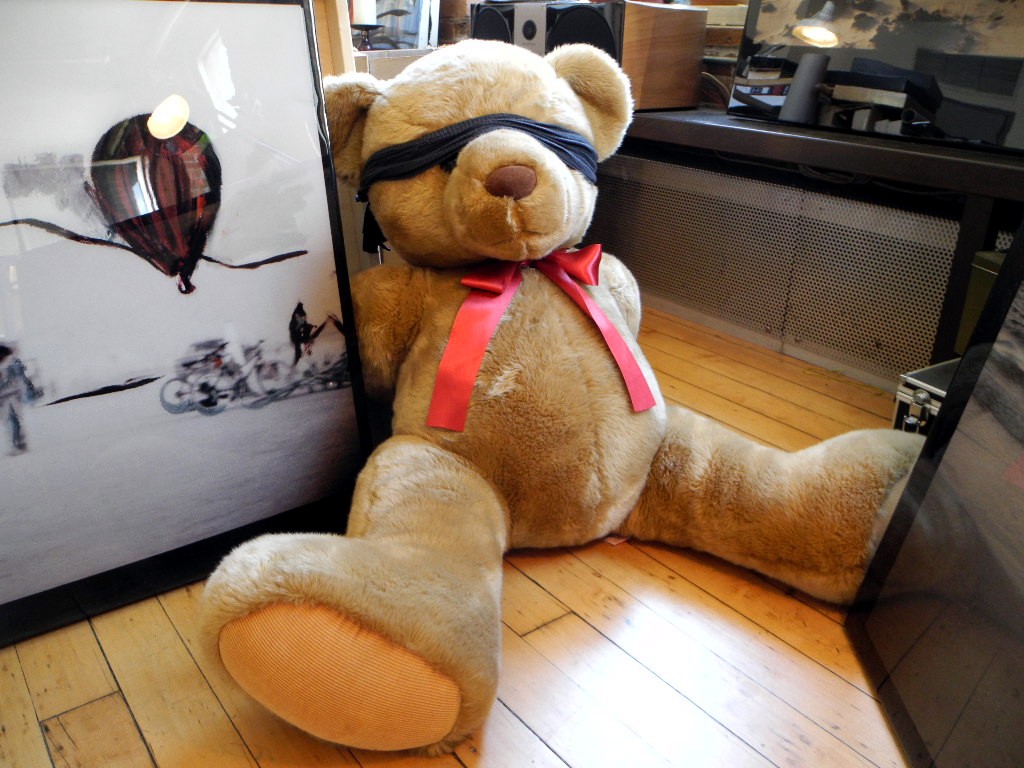 An unofficial “muse” in much of his work 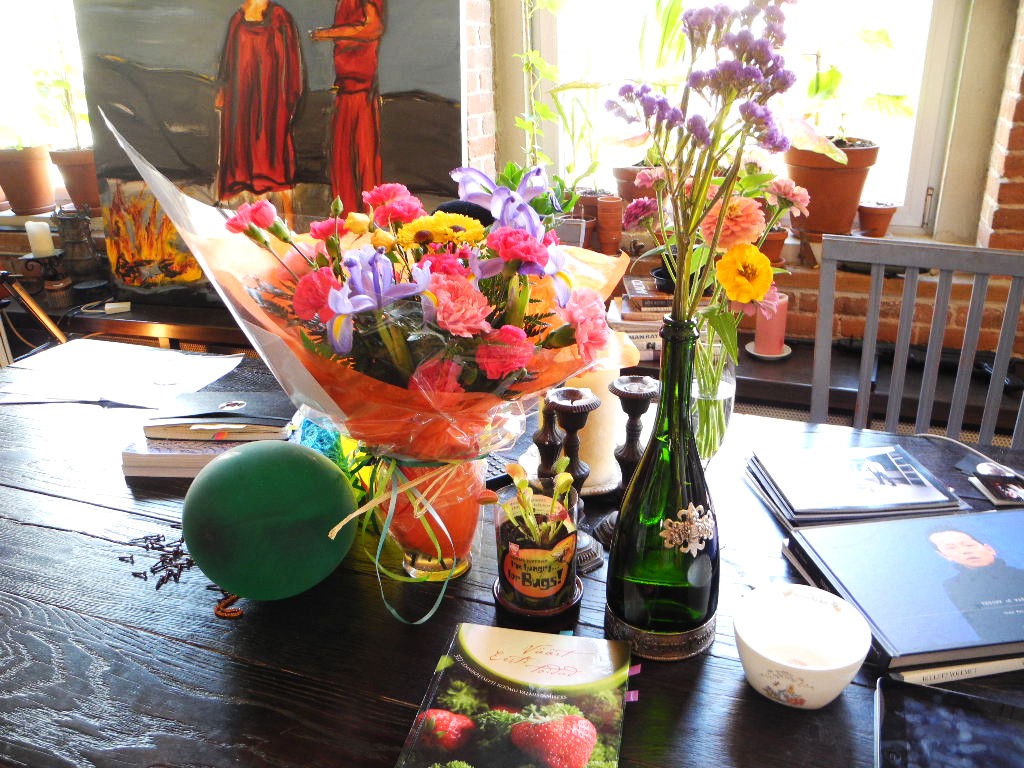 A little tranquility in SoHo might go a long way

I think my favorite story Ohad told me was his encounter with a Buddhist monk, formerly his good friend for several years, whereby they began an argument about Zen.  He began to understand Buddhist teachings and questioned his mentor.  An argument erupted about what “Zen” meant, not just the artificial definition but applying it to the state of being or the world of today.  Needless to say, they parted the path of friendship.  I guess their agreeable versions of spirituality to actuality were irreparable.  Needless to say, Ohad Maiman possesses creativity and an eye for putting elements together.  Below, you will find more images of his recent works. 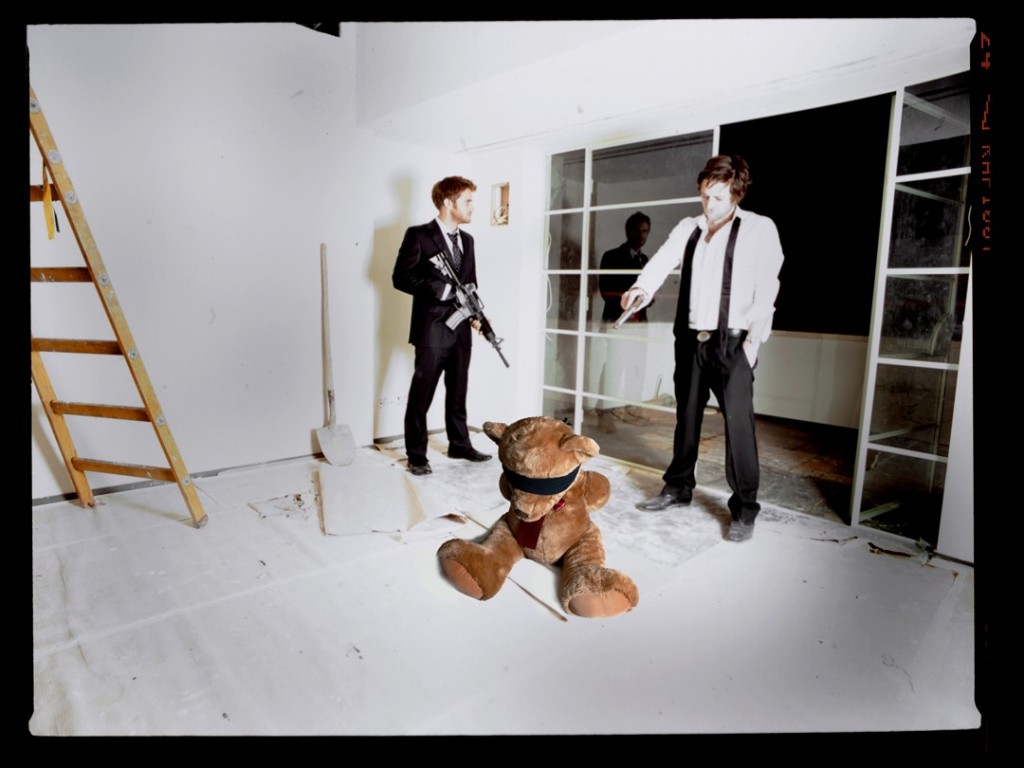 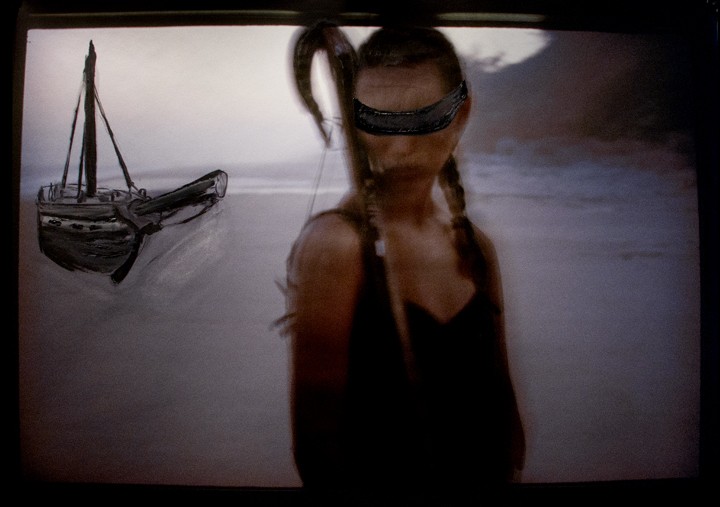 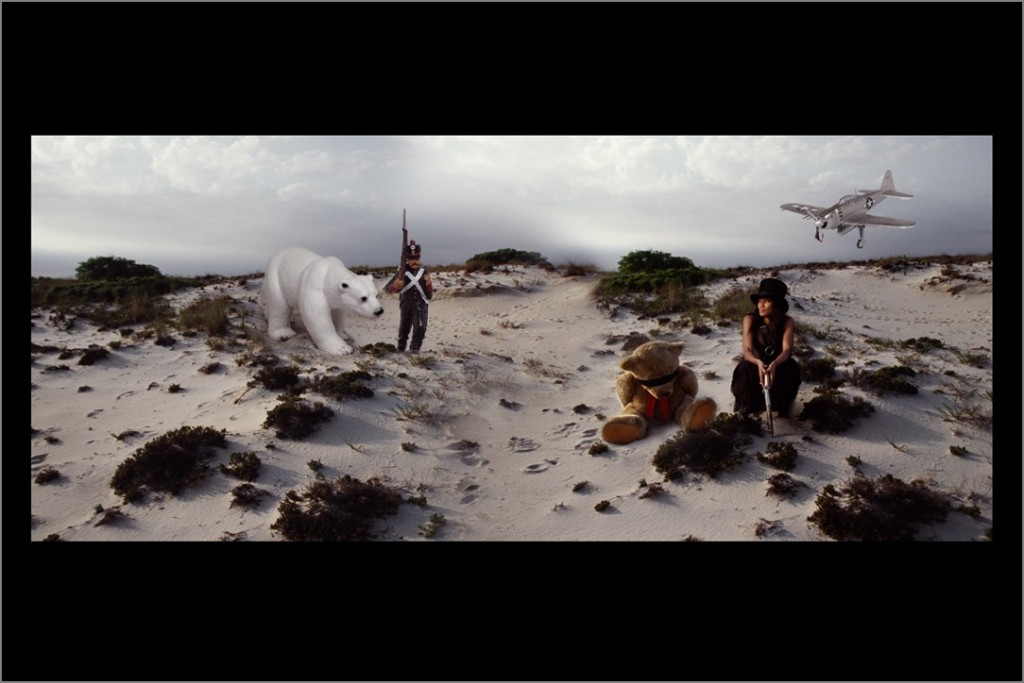 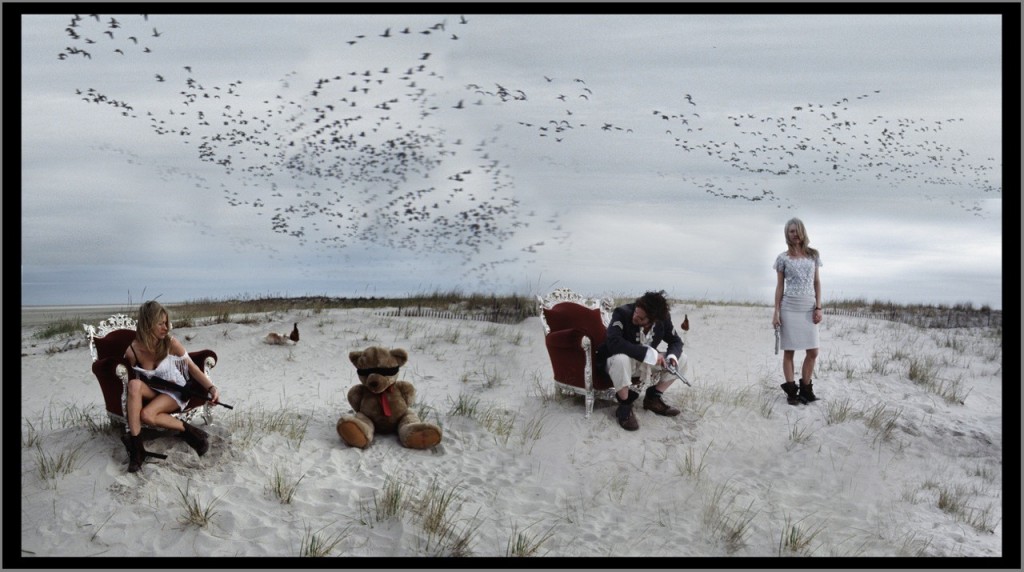 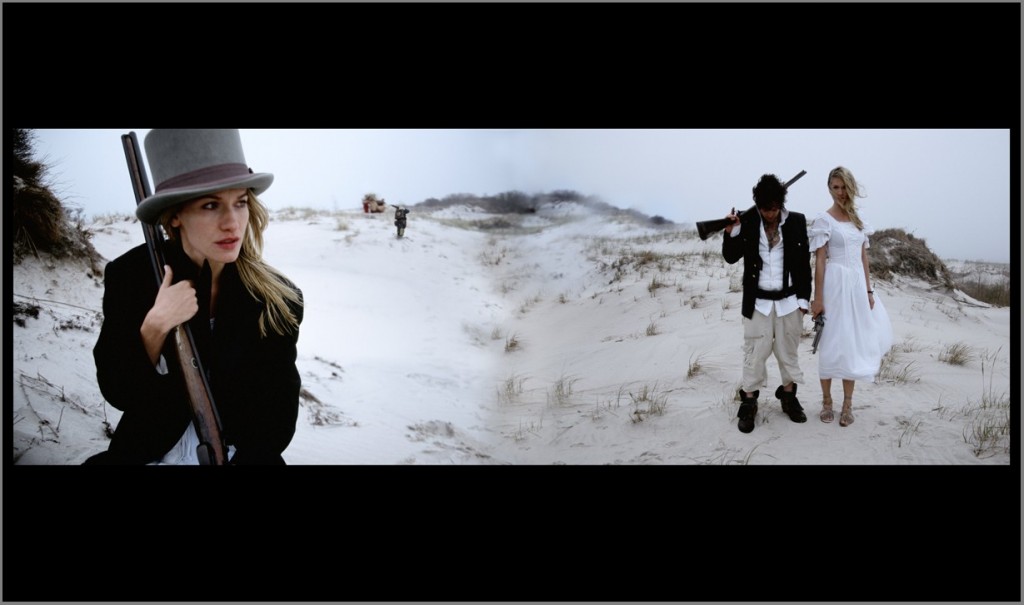 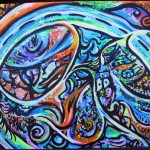